Can Headphones be recycled?

Can Headphones be recycled?

Best Wireless Headphones for Audiobooks of 2021: Complete Reviews with Comparisons

Best Wireless Headphones for Audiobooks of 2021: Complete Reviews with Comparisons

Solid, but a little bit overhyped headphones. Good enough for any music enthusiast or semi-pro musician.

Today we will be reviewing the most popular internet headphones for years – Audio Technica ATH M50X. There are a lot of conflicting stories about them that you can find online – plenty of people love them, plenty of people really hate them.

Although there are various sites telling you that “As the most critically acclaimed model in the M-Series line, the Audio Technica ATH M50X Headphones is praised by top audio engineers and pro audio reviewers year after year”, and “the M50x provides an unmatched experience for the most critical audio professionals.”, this is still a copy-paste from the manufacturer’s site and isn’t really trustworthy enough.

A good story almost always begins with some historical and interesting facts, so let’s dig up some information first.

Model M50X is a successor of the popular M50 model made by Audio-Technica, a Japanese company that design and manufacture professional audio equipment. If you aren’t familiar with the older model, it was really great M50 had a great bass-hard sound for a mid-priced equipment and was often praised as top-best headphones in the early years of 2000.

While, in my humble opinion, they weren’t really the best, they were definitely a great piece of work and really one of the top ones in that price category when they were first released.

Audio-Technica released ATH-M50X trying to catch up to the rising competition of mid-priced studio headphones. When released they were really a relatively cheap, bass-heavy alternative to many expensive models that gave a good, quality sound.

And then the community figured them out. Some of them were first-time users of studio equipment and were astonished by the sound that came through the cans. They threw their earbuds and cheap headphones and started a little cult around them. Suddenly, the ATH M50X became the best headphones ever made. Even now, on the front pages of Google, there are mostly overwhelmingly positive reviews of Audio Technica products. 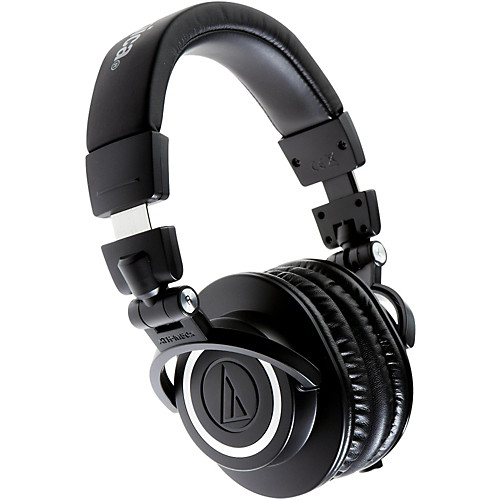 Even though the old model M50 was great – it had a couple of serious flaws that were removed in the making of a new, ATH M50X model.

First, they focused on, in my opinion, the biggest flaw – the discomfort of wearing one. Ath-m50x have a new headband that reduced the clamping force, thus increasing the time you can wear them without discomfort (they can still be kinda hard on your ears and head after a couple of hours). They improved earpad material, reducing that “sweaty” feel while wearing them and overall improving the thickness of earpad.

As of the sound quality – they retained the great quality of the former model, but improving the treble and giving it much more refined sound. Also, it seems to me they refined the bass a little bit, too. Unfortunately, the new model still suffers from a somewhat limited soundspace. 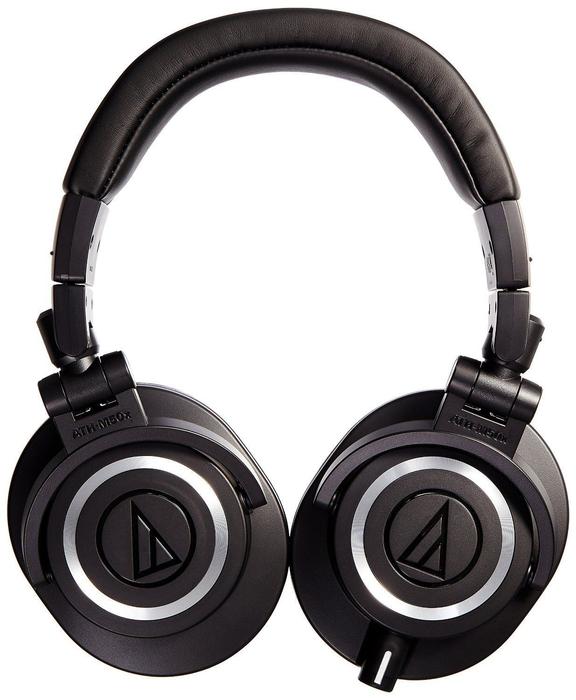 The designers at Audio-Technica were, as I personally am, quite satisfied with the old look of ATH M50 model so the new ATH M50X is almost identical to its predecessor. They retained that robust look that is appealing to the people that aren’t mainly focused on the “fashion” side of headphones – the focus is primarily on the quality of the sound and comfort of wearing these headphones.

The Audio Technica ATH M50X is a full-size, circumaural (around the ear), sealed headphone. Construction-wise the M50x is decent and, like almost every other headphone in this price category, most of the outer construction is plastic. However, it feels like it’s the kind of plastic that breaks rather than bends on stress.

Both earcups are on hinges which allows them to fold up and inward to reduce in size for transport and storage, but they also swivel 180 degrees so the earpads lay flat on the table when you take them off, and flat on your chest when you wear them around your neck.

Even though there is a lot of improvement in the earpad material, it’s still a kind of an inexpensive material of the earpad and headband, which may cause these headphones to get a bit warmer and stickier especially if you find yourself in a high-temperature room. 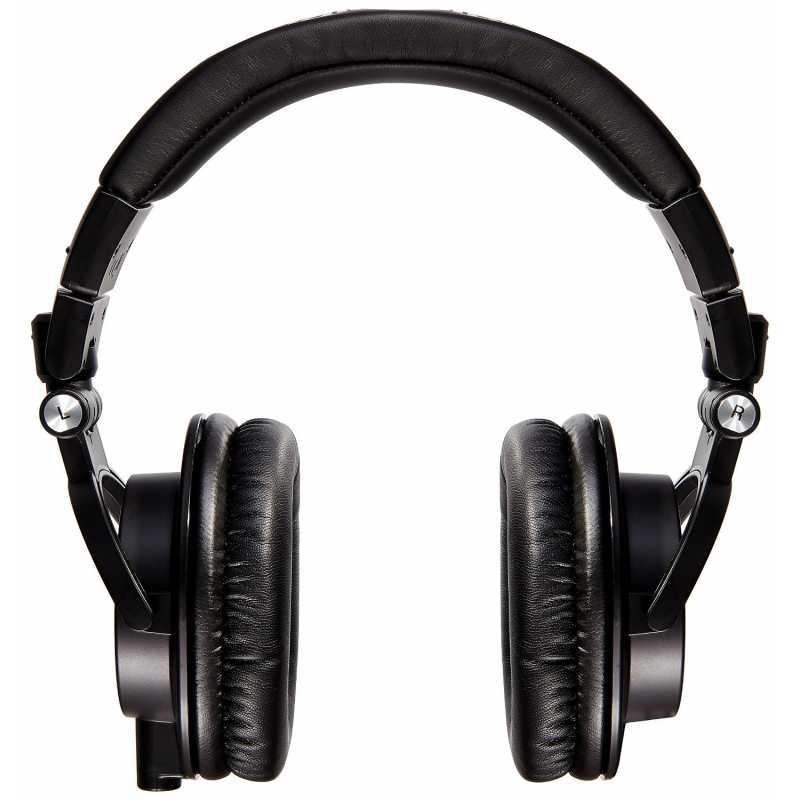 If we look at the price, these headphones are pretty good for their value. The sound performance coming out of the 45mm drivers with copper-coated aluminium voice coils is pretty clear and decently balanced throughout the frequency spectre, though they can sound piercing in the high-end and muddy in the low-end.

And why is that? Simply, it’s because of the V-sound signature. A V-shaped sound signature has an elevated bass (low frequency) and treble (high frequency) with a recessed mid-range. Some types of music are boosted by this – like modern rock, hip-hop, and pop.

On the other hand music like classical, indie rock will sound lacklustre and hollow. For that reason, I’m not sure if you would call these “monitoring” headphones or even DJ recommended.

With all of this in mind, we can safely assume that you won’t make mistake with buying it. This product gives you a fun, clean sound. If you are a professional, or you aspire to be one – the tuning might be too funto be considered reference grade. 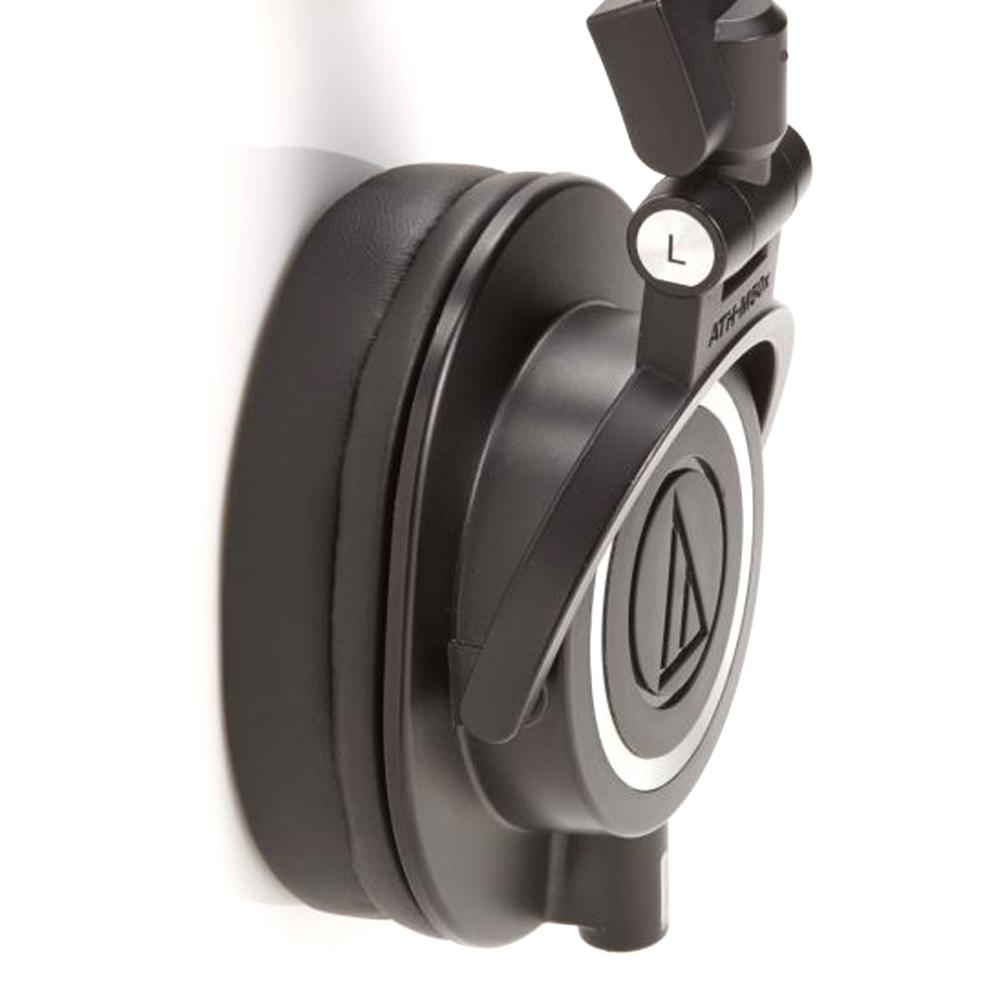 One of the key aspects of good headphones is their ability to cancel as much as background noise as possible so that you can enjoy your favorite music without being interrupted by, for example, a passenger in a street talking loudly on his cellphone or in the bus.

With up to 36 dB of noise isolation, these closed-back headphones are hard to beat in this regard, combined with 90-degree swiveling earcups that can help fight off those pesky sound off.

Keep in mind they are PASSIVE isolation headphones, meaning they rely on its design and material to isolate as much background sound, and with that in mind – I’d give these headphones 9 out of 10 on noise isolation.

For a mid-range price product, Audio Technica really did good work with ATH M50X Headphones. Decent material with large earpads and a great design can really give you a pleasure of taking your headphones to the street or a gym, without a need to volume up your favourite song (and risk a potential hearing loss). 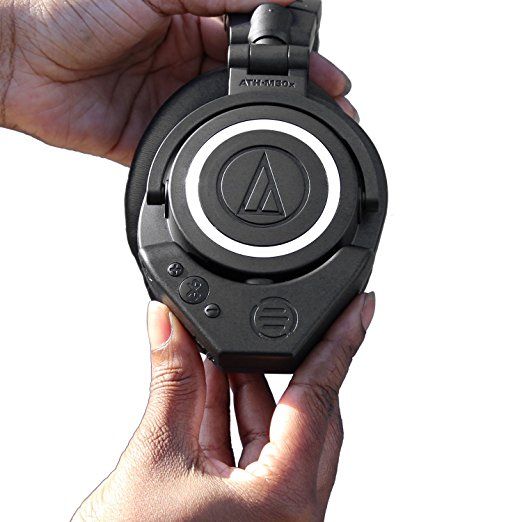 This model doesn’t possess controls for volume up/down or a mic, and if you are using it with, for example, iPhone, you would need to unplug your headphones which is in a way a hassle. 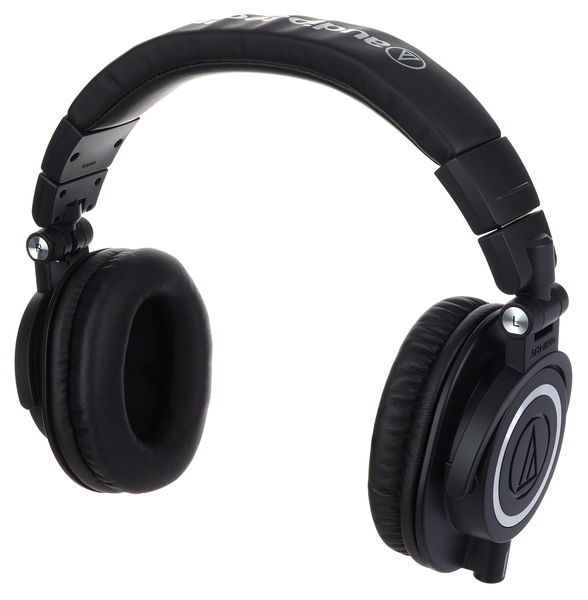 A higher quality studio headphone set will usually have a larger impedance (>36 ohms), which means these headphones require more power to drive but will give a clearer sound and less distortion. ATH M50X have an impedance of 38 ohms which means (depending on the type of device you plugged it in like iPhone/iPad or other) they will lower your battery level in about a 50% after a couple of hours.

Given that some apps (like Youtube for example) have been famous for “munching” our batteries at an alarming rate, it’s safe to say that Audio Technica ATH M50X model doesn’t really strain the battery that much for a high-quality headphone. 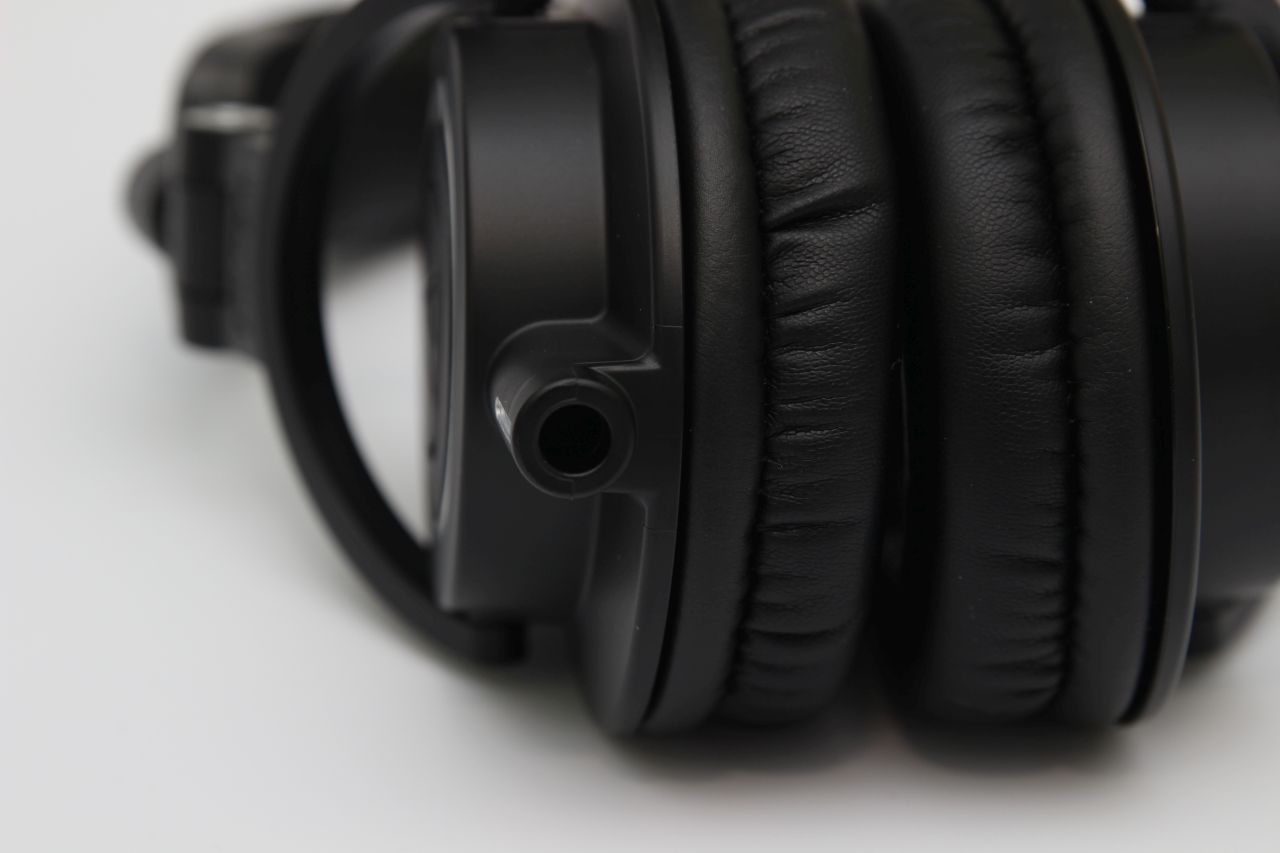 When you open the package, you can notice three different cables in the box, covering the three most common styles of cable in the world of wired headphones. There’s a 1.2-meter mobile straight cable, a 1.2-meter coiled cable that stretches to 3 meters, and a 3-meter straight cable.

The coiled cable and 3-meter straight cable both have threads on the end for a screw-on 6.3mm adapter, which you are getting together with the package.

There is no wireless adapter provided by the company for this model, but there are plenty of ones available on the internet that you can buy relatively cheap.

The regular colors scheme is black and white.

Model Ath-m50x is the black one and has that non-aggressive, yet bold look with a silver circle that we really loved on m50.

The white one – Audio Technica ATH M50X model is in my opinion kinda bland, but hey – the beauty is in the eye of the beholder, so maybe this color is really right for you.

Except for those 2 regular colours, the company often put on market limited-edition series, including Ath-M50xBB that is still on the market, a nice mixture of strong blue and a black headband, Ath-m50xBL that comes with an interesting mixture of matte blue and brown leather on a headband( a series that is no longer available but marketable on sites like Amazon etc) and many others.

Price range is from 100 dollars up to 149 dollars. And while that price was really great a few years ago, the market today is much better supplied with slightly or much better cans in that price range.

While I really loved the old M50s, Audio Technica in its pursuit of the profit really made a bad call with this model – model look and feel like a pro tool that was hastily consumerized. Given the hype that the internet community gave the old model m50s, they decided to make this jack of all trades an improvement in some criticized areas (improving comfort and adding a detachable cable mostly) to try to cater to the wider audience.

Even though this is still a decent product, I don’t see why would a real studio professional use ATH-M50X over other headphones. But if you find this product under 120 dollars, I’d say go for it – there isn’t a competition in that price range. 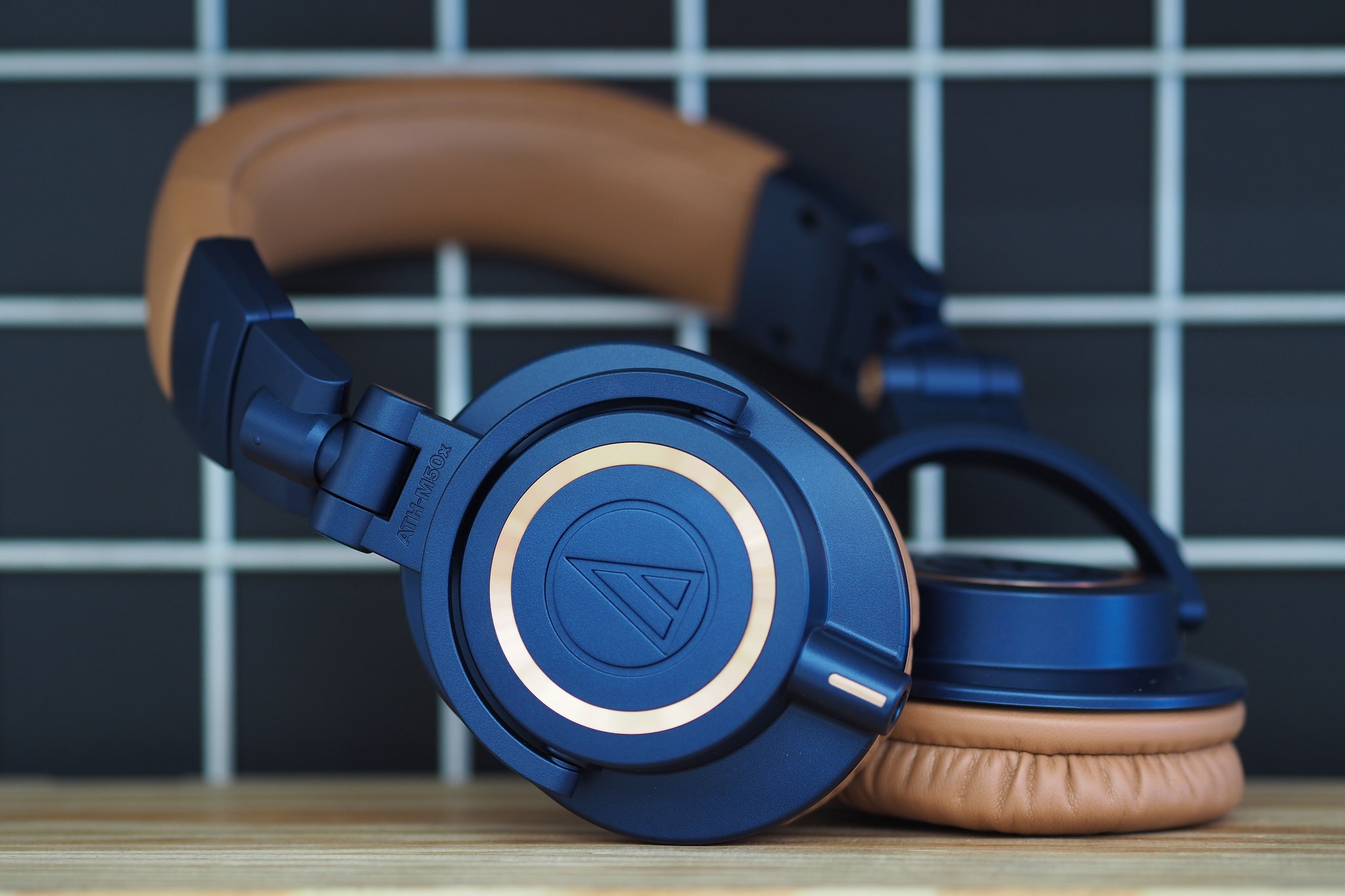 While it may sound like I bashed them in this review, I actually think they are not bad at all. They are not the best ones, they are not the cheapest ones – but they have their strong points. I always loved their old-fashion, 70’s studio’s design.

Their sound quality is very good, even exceptional if you are an amateur musician or you just ventured into the world of “audiophile”. They are quite sturdy, promising long years of exploitation. Also, they are comfortable enough for a long session usage. 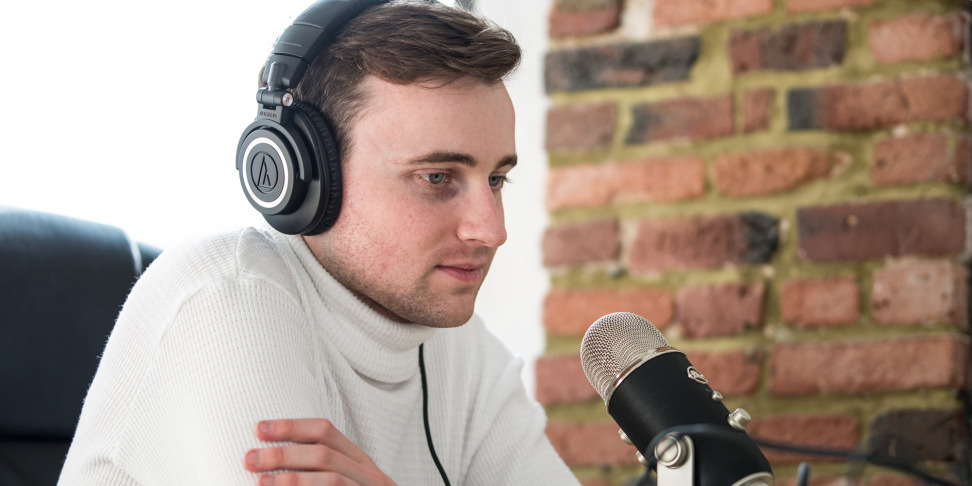 Overall, these are good enough headphones for music enthusiast and amateur musicians. In some sense, they made a good product to rival other companies.

When released they were really a relatively cheap, bass-heavy alternative to many expensive models that gave a good, quality sound. But today, depending on the music and your general interest, you may find out that this model isn’t really that good, given its nature of bass-heavy sound and a lack of detail in the mids and highs.

Still, one of the things that can make you fall in love with this model is a very direct, up-in-your-face sound and a robust build that grants durability.

Overall, decent headphones regarding your preferences. Depending on the price you can get them, they are still a great alternative to newer and more expensive models on the market.

Keep in mind these are monitoring headphones – so their purpose is to make the music as much as clear and “precise” as possible – they are not made to make a sound “pleasing”.

I am the head author of ForTheSound. I want to bring you the best in-depth reviews of Headphones and earbuds.

Yamaha Headphones Review: Is the YH-E700A Any Good?

Powerbeats Pro vs Airpods Pro: Which One Is Best?